Has negative psychology ever spurred you on to achieve your dreams?

A talk by Cathy Cassidy, author of novels for young people aged around 9 to 14, brought memories of my youth in the 1970s flooding back.  She recounted her new-found delight as a young girl, in securing her magical free pass to the library, enabling her to borrow 6 books at a time!  Supported by her father, she proceeded to consume every appealing book she could lay her hands on…  I found myself instantly transported back to my days of reading anything from the Famous Five, Secret Seven, the Nancy Drew mysteries, Sue Barton Student nurse, and much more.  Devouring such books often involved curling up under the bedclothes surreptitiously reading with a torch after lights out!

Another staple of our shared youthful experiences was taking delight in the short stories (and, of course, the problem page!) in Jackie magazine. Cathy, encouraged by her father, had written and submitted story after story with the hope of appearing in the magazine.  Her determination even stretched to wall-papering her bedroom with rejection letters, rather than giving up! 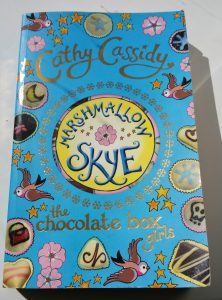 Many aspects of Cathy’s talk resonated strongly.  How, at around the age of 11 or 12, suitable reading matter dried up – there was no such thing as Young Adult fiction in those days!  She also recounted how, being good at English, she was advised by her careers adviser to seek employment in an office in a local car factory, as becoming a writer seemed too lofty an ambition!  Fortunately, she had the determination to avoid this advice, and secured a junior post at her favourite magazine – Jackie!!  Through the serendipity of having a desk next to the editor she ended up reading and commenting on stories; ultimately progressing to become the editor herself.

Life took over, and on reaching her early 40’s, Cathy found herself with a family, but without a published novel.  At this point, a new neighbour gave her a much-needed jolt, by telling her that, having reached this age, it was probable that she never write a novel.  A great piece of reverse psychology, which spurred the tenacious writer on, and now she is the successful author of several books.

Cathy spoke with great authenticity about her journey.  One of the key things that she urged other aspiring writers to do is to get their message out into the world.  In these times of conflict and uncertainty, you never know who might need to hear it.  It is never too late to pick up your pen, and write…

What step could you take right now that would take you nearer to achieving a long-held dream?